What is an Exception?
Answer: An exception is an event that disrupts the normal flow of instructions during the execution of a program. It is a runtime error in java. We can also say that the object-oriented representation of an abnormal event occurred during the program execution is known as “exception”. I.e., Exception is an object.

What are the problems if the exception is raised?
Answer:

What is an exception handling?
Answer: It is a mechanism of dealing with exceptions and thereby preventing the dangerous effect caused by the exceptions.

How to handle exceptions in Java applications?
Answer:  There are two kinds of support from java to implement exception handling.

What is the difference between error and an exception?
Answer:  An error is an irrecoverable condition occurring at runtime, such as OutOfMemory error. These are the JVM errors, and you cannot repair them at runtime. While exceptions are the conditions that occur because of bad input etc. For example:

How to create custom exceptions?
Answer:  Your class should extend class Exception or some more specific type thereof.

What should I do if I want an object of my class to be thrown as an exception object?
Answer: Extend the class from the Exception class. Or you can also extend your class from some more precise exception types.

What is the basic difference between the following approaches of exception handling?
Answer:

When should you use which approach?
Answer: In the first approach, you, is a program of the method, yourself are dealing with the exception. This is fine if you are in the best position to decide. If it is not the responsibility of the method to deal with its exceptions, then do not use this approach.

In the second approach, we are forcing the caller of the method to catch the exceptions that the method is likely to throw. This is often the approach library creator uses. They list the exception in the throws clause, and we must catch them. You will find the same approach throughout the java libraries we use.

If I write System.Exit (0); at the end of the try block, will the ‘finally’ block still execute?
Answer: No. In this case, the Finally block will not execute because when you say System.exit (0), the control immediately goes out of the program, and thus ‘finally’ block never executes.

User-defined exceptions should usually be checked.

By using one line of code, how can one prove that the array is not null but empty?
Answer: Print args.length. It will print 0. That means it is empty. But, if it is null, then it will be thrown a NullPointerException.

Class Error and its subclasses also are unchecked. With an unchecked exception, the compiler doesn’t force client programmers either to catch the exception or declare it in a ‘throws’ clause. Client programs may not even know that the exception could be thrown.

Example: StringIndexOutOfBoundsException thrown by String’s charAt() method· Checked exceptions must be caught at compile time. Runtime exceptions do not need to be. Errors often cannot be.

If my class already extends from some other class, what should I do if I want an instance of my class to be thrown as an exception object?
Answer: You cannot do anything in this scenario. Java does not allow multiple inheritances and does not provide any exception interface too.

How does an exception permeate through the code?
Answer: An unhandled exception moves up the method stack in search of a matching. When an exception is thrown from a code that is wrapped in a ‘try’ block followed by one or more ‘catch’ blocks, a search is made for matching catch block. If a matching type is found, then that block will be invoked.

If a matching type is not found, then the exception moves up the method stack and reaches the caller method. The same procedure is repeated if the caller method is included in a ‘try-catch’ block. This process continues until a ‘catch’ block handling the appropriate type of exception is found. If it does not find such a block, then finally, the program terminates.

What is the catch or declare rule for method declarations?
Answer: If a checked exception may be thrown within the body of a method, the method must either catch the exception or declare it in its throws clause.

What class of exceptions are generated by the Java run-time system?
Answer: The Java runtime system generates Runtime Exception and Error exceptions.

What are the ‘final’, ‘finalize()’ and ‘finally’?
Answer: final: The ‘final’ keyword can be used for class, method, and variables. A final class cannot be subclassed and it prevents other programs from subclassing a secure class to invoke insecure methods. A final method can’t be overridden. A final variable can’t change from its initialized value.

Finalize (): The ‘finalize()’ method is used just before an object is destroyed and can be called just prior to garbage collection.

Finally: It is a keyword used in exception handling, creates a block of code that will be executed after a try/catch block has completed and before the code following the try/catch block executes. The ‘finally’ block will execute whether or not an exception is thrown.

For example, if a method opens a file upon exit, then you will not want the code that closes the file to be bypassed by the exception handling mechanism. This ‘finally’ keyword is designed to address this contingency.

What is an Exception in Java?
Ans: Exception: An event which disrupts the normal execution of a program is known as exception

Explain the exception hierarchy in Java? Whether multiple catches is possible for a single try block?
Ans: Throwable class is the root class for every exception, and it branches out to 2 main categories, i.e., Exception & Error

What is the difference between Exception v/s Error in Java?
Ans: Both are sub-class of Throwable class

What is the superclass for Exception & Error in Java?
Ans: java.lang.Throwable is the root class for all types of Error & Exception

Is it valid to keep only try block without catch block or finally block?
Ans:
No, keeping try the block will raise the compile-time error stating “Syntax error, insert “Finally” to complete BlockStatements”
There are 3 possible combinations for the try block

The only other possible combination is, try block followed by multiple catch blocks 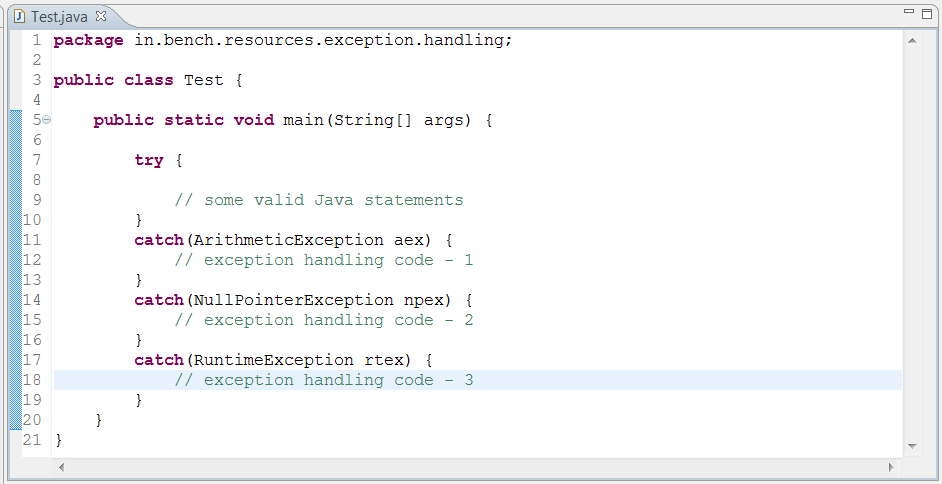 In other words, if there exists a parent-child relationship between 2 exception then child exception must come 1st up in the order and then followed by parent exception Otherwise, compile-time error will be thrown stating “Exception Name-Of-Exception has already been caught” Also, declaring multiple catches with the same type of exception results in compile-time error stating “Unreachable catch block for Exception-Type. The catch block already handles it for Exception-Type.”

Whether exception raises from a catch block?
Ans: It is very much possible that, the code inside the catch block to raises exception and this need to be handled Otherwise, the program terminates abnormally

Which method is used by default exception handler to print the stack trace?
Ans: printStackTrace(); method of Throwable class

What happens if there are some Java statements after explicit exception thrown using throw keyword?
Ans: the Compile-time error will be thrown stating “Unreachable code” Example, as shown in the below screen capture

Why is the only object of type Throwable (or its sub-type) allowed to throw?
Ans: Using the throw keyword, the only exception can be thrown. Therefore, all exception thrown should fall in the exception hierarchy (extending any one of the types of Throwable class). It can be checked or unchecked or a user-defined exception

Whether it is valid to throw Java object, which isn’t extending any Exception/Error from exception hierarchy?
Ans: As explained in the above question, the only exception can be thrown which should extend any one of the types of Throwable class Throwing normal Java object which isn’t extending any exception-type from exception hierarchy will result in a compile-time error stating “incompatible types”

How to write a custom exception, explain its steps?
Ans: It is very simple, Write a Java class with any valid names adhering to Java syntax and extend any one of the types of Throwable class Later, this exception can be used with a throw, throws or catch keyword in exception handling

Note: in all cases, it the responsibility of the caller method to handle this exception whether by surrounding with try-catch or declare the throws clause

Explain the difference between ClassNotFoundException v/s NoClassDefFoundError in detail ?

What is an unreachable block in Java?
Ans: There are various scenarios when this compile-time error is encountered If there is any statement after throw clause When declaring multiple catch blocks, parent exception declared before than child exception Declaring catch block for checked exception-type, when actually try never going to throw that exception Any valid Java statements after return statement Any valid Java statement after finally block, if finally block is returning some value
Note: try examples on your own